Correspondent Ed returns to our pages, this time infiltrating behind enemy lines to report from Anfield.  This is the first of two posts today at farlieonfootie, affording those of you who work another excuse to delay doing whatever it is that you do:

When in the 34th minute Andy Carroll rose in the air, thrust aside defender Alexander Kolorov and bludgeoned the ball with his head past a sprawling and shell-shocked Joe Hart to give Liverpool a 3 to 0 lead, I half expected him to turn to the cameras and belch loudly from the tasty meal he had just made of a very expensive Manchester City side.  Carroll had fired in the first goal on the volley – his first for Liverpool -- and not long thereafter parried a ball back in play that led to the second. He was too much to handle for City all evening, and reminded the EPL why a throwback with size and power can still roam the front lines with success in the modern game.

Luis Suarez, Liverpool’s other big pick-up in January, also played extremely well, putting constant pressure on City’s defense and tracking past an out-of-position Julian Lescott with ease early in the game and slamming one off the fingertips of Hart and the right post.  Lescott at left back remains a mystery to me.  He’s a B+ center back who’s pretty much C- against fast wingers on the outside.  Yet Roberto Mancini, the beautiful one, insists on putting him outside only to see him beat and beat and beat some more.

But it wasn’t Lescott’s fault alone, or really much at all.  Despite some searing square passes by my favorite wipping boy, Gareth Barry, the entire City team again showed up with little energy in what they must have known was a big game.  While the FA Cup semi-final with United loomed, surely the team can feel the footsteps of Luca Modric and the rest of the Spurs not far behind them in the standings.  In fact, now the teams vying for the fourth and final 2011 Champions League spot are separated by a mere three points.  This is strikingly similar to last year, when Spurs came up big at year end to beat a half-assembled City team to claim the fourth spot.
Liverpool, on the other hand, seem like a team that has found itself once again.  They played with tenacity and speed, and touched the ball to each other with determination and quickness – if not always accuracy – to advance the ball through the middle of the pitch.  Steven Gerard may be out for the season, but it looks as if this Liverpool team will be just fine without him for the time being.  In fact, it will be interesting to see how he fits in when he returns.  Suarez seems a better fit for the forward position he was frequently playing, which puts him back to a true midfield role.  Ultimately, I think having two threats up top will suit his passing game well and put Liverpool back on the map.

Too much can be made of one game, but I don’t think too much can be made of this one.  Liverpool’s punishing victory – the game ended 3 to 0 – shows that the rebuilding in Anfield is close to done.  It’s been reported that NBA star LeBron James has just joined Liverpool’s owners from New England (you know, the England in the northeast United States).  After watching this evening you can imagine he’s pleased with his investment.  As for City, one has to wonder whether they can hold on to fourth place in the league, something which most believed was a foregone conclusion at the beginning of the year in light of their talent.

And as for the rest of the EPL, well, we should all buckle up for what could be a fantastic future with what’s looking like 6 top tier teams in a constant fight for position at the top of the table. 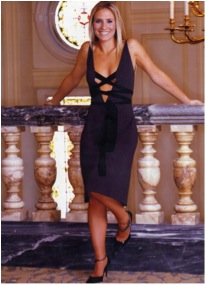 It hasn’t gone unnoticed by the boss-man that my old thread about regarding my other favorite Charlie – Charlie Webster -- has reached the top of the charts here at farlieonfootie.  As has been ordered (see Get Sexy) we’re supposed to put a little steam on here at the website in an effort to keep the clicks high, so lest we leave you looking for more, let’s give a shout out to our favorite Georgie – Georgie Thompson – who gets our current “Why Sky Sports Is Better than ESPN” award of the month, as well as honorable mention on our list of attractive British women with men’s names.  Congratulations GT!!

This is farlieonfootie for April 12.

Posted by farlieonfootie at Tuesday, April 12, 2011