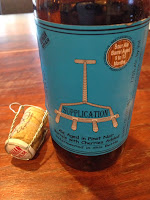 The Location: Napa, California, in the heart of the American wine country.

The Date: Saturday, November 9th, after a tough day of touring vineyards on a bike.

The Weather: 66 degrees, sun just beginning to lower in the perfectly blue California sky, trace humidity.  Best described as "the absence of weather."

The Scene: Feet on table, the University of Miami and Virginia Tech playing college football on a nearby television, with a small group of people relaxing near the hotel bar.

The Music: I Drive Your Truck, Lee Brice

The Taste: Tart cherries and a mild funky taste, but not nearly as sour as one might expect -- the sourness being just about perfectly offset by a brown sugary sweetness.  The pinot noir barrels that the beer was aged in make themselves readily apparrent.  There's a saying in the wine business that it "takes a lot of great beer to make a great wine," and there's no better example of that than this beer from the ultra-talented Vinny Cilurzo and crew.

The Feel: Life doesn't get much better than this.

Posted by farlieonfootie at Wednesday, November 13, 2013