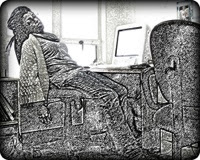 You can almost smell the ennui in Ed's report:

Well everyone at the top of the table won, some in spectacular style, but then there were Spurs.  Fresh off a waste-of-time Europa League performance (what is the point, actually, of the Europa league?), Spurs looked a painfully listless side for most of the match.  As the boss-man often says, you could almost smell the ennui.  Only Michael Dawson, Spurs' least talented player, seemed to really go after it and want to win.  Aaron Lennon again made some terrific runs that ended with poor crosses to no one or giveaways.  There is no player in the BPL that can beat people at will yet never scores or gets an assist.  His final ball has to rank up there with over-35 recreational soccer league players.

It’s easy to blame the manager when a team comes out like this, but frankly I’ve seen it happen to every team in the league and unless it becomes a patter it’s hard to blame Tim Sherwood for this.  That said, I’m not sure: he played so defensively and didn’t put in a second forward until the 65thminute.  This is a team that plays good defense but simply cannot score.  It was clear that Adebayor alone at the front wasn’t going to get even a chance without help.

Then there is the mysterious case of Roberto Soldado.  Spurs only had one shot on goal in this match, and if I recall it wasn’t a very good one.  Soldado, however, had a sitter off a pass from Adebayor that my son could have put in the back of the net (as he noted), but which Soldado couldn’t put on frame.  Shortly thereafter he had another which he also ... couldn’t put on frame.  If Soldado had just been as good as, say, Giroud or Negredo, two players that would have fetched a similar or lower amount in the transfer market, Spurs might actually be in top four right now.  However, his complete inability to score given chance after chance is painful and inexplicable.  Sherwood ought to sit him down with a shrink as soon as possible.  Hey, Brendan Rodgers did something like that with his team and it seems to be working.

Now Spurs sit six points back of a Liverpool side that is showing no indication that it will ever lose again.  Considering the people they bought – Soldado, Chadli, Capoue, Lamela – and in his current form at Real Madrid, Gareth Bale is looking more and more a $100 million man.  As I’ve said before, at this point only Paulinho has played up to the value of his salary.

This is farlieonfootie for February 23.

Posted by farlieonfootie at Sunday, February 23, 2014