Regular EPL Columnist Ed checks in, with an alternate view of El Superclasico.  Can't wait for the post-staff-meeting fireworks to begin:

Last night I sat down at 10:30pm after a long day at the office and turned on the Barcelona vs. Real Madrid “El Clasico.”  If that little descriptive title (it’s not just a game, it’s a Classic!!) doesn’t make you gag something up from lunch, then what I saw probably would.  In addition to the hysterical commentary (not “ha ha" funny hysterical, but rather the “I’m squealing about every pass in this match like I just saw the face of God” hysterical), what happened in the game reminded me of everything I hate about La Liga:  flops, slap fights, excessive hair product, and I’m sure there were a few European man bags as well.

Let’s begin with Barcelona.  I will grant you they are the best team in the world.  Messi is unbelievably good.  I get it.  Yada yada yada.  But I also can't begin to imagine how irritating it would be to be dominated by ten 5’ 6” guys that weigh an average of about 135 pounds.  The way they keep the ball away from you and instantly flop whenever you get near them – urgghhh -- defending them has got to be like trying to kill a fly with a hammer.  I think after the game I might have to put a few of them over my knee and give them a good spanking just to keep them balanced in the head.

And they need it!  How about we ease up on the vanity, guys!  Unless you’re auditioning for a teenage boy band, I think you can drop the hair gel and the 80’s perms.  Here’s a question:  can you think of another sport outside of roller dancing where the competitors wear hair gel?  And what the hell is the ball like after a few headers?  I’m not a huge fan of the tattoo sleeve, but at least it’s edgy and doesn’t come off on the ball.  Seriously, Barcelona, you’re a bunch of pretty boys.  Let me recommend a quick read that might help you out:  To Be a Man, by Charlton Heston.  Yeah, I’m talking about this guy: 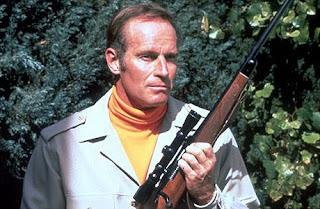 
And hey, Coach Pep, what’s up with flipping the ball away from Ronaldo on the throw in?  Just hand him the ball, don’t be a little tease.  Ronaldo – who’s also so vain that he probably thinks this article is about him -- was absolutely right to give the coach a shove, though I think a quick knee to the groin might have been better.  And Coach, don’t make your girly-man image worse by appealing to the official and letting one of your 135 pound midfielders defend you.  Seriously, stand up to the guy that just shoved you.  See, for example, David Moyes after being shoved by Italian pretty boy Mancini.  No really, watch a clip of how to handle yourself in these circumstances:

Please note how Moyes is at first surprised, and then slowly, calmly, walks over to Mr. Beautiful and just begs him to take a shot.   That’s how you play it.  Presuming, of course, that you’re not a little girl.  No I take that back; my seven year old daughter would definitely have dropped the gloves on anyone that did that to her.
Let’s not let little Messi off the hook either.  I get the rage of Ramos at the end of the game.  While I don’t condone his kicking Messi in the ankle to relieve the frustration, for the reasons explained above, I get it.  But Messi, don’t just flop to the ground and hold your wee little foot!  When someone does that to you it’s pretty much Go Time.  Stand up and get in his face!!  Again, see David Moyes and Charlton Heston, above.
I realize I’m running out of exclamation points here, but that’s the only way I can keep this one family friendly.  So to conclude this rant, let me give an award for the most namby pamby player of the match:  Congratulations, Carles Puyol!
We’ve already discussed the 80’s hair band coif.  But your moment of the match – your el classico “quienes not mas macho” moment – came in the scuffle following Ramos’s kick at Messi.  When you walked into the fray, someone PALMED YOUR FACE and shoved you backwards.  And what did you do?  Do you remember?
Well here’s what I saw.  I saw you wrap your hands around your head like a four year old that just ran into a door, and then launch yourself backwards in an attempt to pull off the best back triple lindy since Greg Louganis left half his head on the diving platform in the ‘88 Olympic Games. But no, the embarrassment doesn’t end there, because when you noticed that no one – NO ONE – saw what happened, you popped back up and rejoined the fray in what I can only guess was the hope that you might be lucky enough to draw another face palming.  I have three words for you Carles and I’d like you to think about these as deeply and as thoughtfully and as passionately as you can:
You.  Little.  Princess.
So where do we go from here, Carles?  Well, as the kids say, let me drop some knowledge on you.  The Real guys are, like you, mostly pretty boys.  I realize that you don’t want to actually get into a fight – clearly that might make the post-game inter-squad tickle fight even more awkward than it already is.  But perhaps (just a suggestion) you should reconsider having a post-game inter-squad tickle fight to begin with (even here at farlieonfootie we've stopped having them, ever since that buzz-kill James slapped a restraining order on us).
And perhaps next time this happens to you, next time someone disrespects YOUR FACE, I’d like you to think “What would Ray Lewis do in this instance?”  Or for short, WWRD?  Who’s Ray Lewis?  He’s this guy, and he’s even scarier without the helmet: 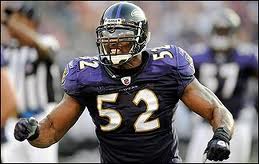 How would you guess he'd react to a face-palming by a 140 pound diva?
As for me, well, here’s the deal.  Next time my friends tell me that I must watch Barca, or that Real is so good, or that the best soccer in the world is La Liga, or that Messi is so special, I’m going to do what I know is right.  I’m going to flip through the channels and look for the game that’s being played on the nastiest pitch in front of the smallest crowd with the worst weather and the most profane coaches.  If I’m lucky, there might even be poorly drawn devilish image of some random, unheralded gapped toothed Scotsman on the wall.  Sure, the football might not be so good, but at least the guys fighting for the ball will be tougher than I am.

This is one of three posts for farlieonfootie for December 4.

Posted by farlieonfootie at Friday, December 03, 2010