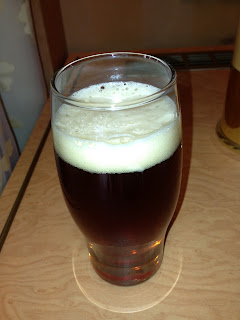 Morning Wood poured a burnished copper that appeared almost cherry red in the near 'round-the- clock sunlight of an Alaskan summer. The beer also had a huge, off-white head.
The initial smell was hoppy, although we also detected a fair amount of malt in the nose, as well.
Morning Wood displayed a subtle hop and malt mix upon tasting, not too much of one or the other, but fairly well balanced in keepign with the british style.  It was tingly on the tongue -- maybe a bit too much so.  On the whole, it was better than average, but we found beers in Alaksa we liked  more: B