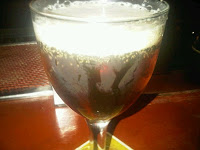 (5.00% ABV) On draft, served in a goblet. De Koninck pours a clear golden color, with a one-fingered head which quickly recedes into a thin white line serving only to guard the contents from my thirsty mouth. The beer's smell is almost non-existent; there's nothing there, except maybe some mild grains. It smells like bread.

De Koninck tastes mild, as well. It's got some hop bitterness, but these are not aggressive hops, these are the world famous Saaz hops, which must spend a lot of their lifetime just chilling out, because they're very mellow. There's something else going on, but I'm not quite sharp enough to figure it out -- I'll leave it at a certain barely detectable level of funkiness. De Koninck is crisp, clean, and extremely drinkable.  I give it a A-.

Posted by farlieonfootie at Saturday, June 04, 2011